Exploring the complexities of the three dominant issues that infrastructure development is currently facing: Decarbonisation, Decentralisation and Digitisation. 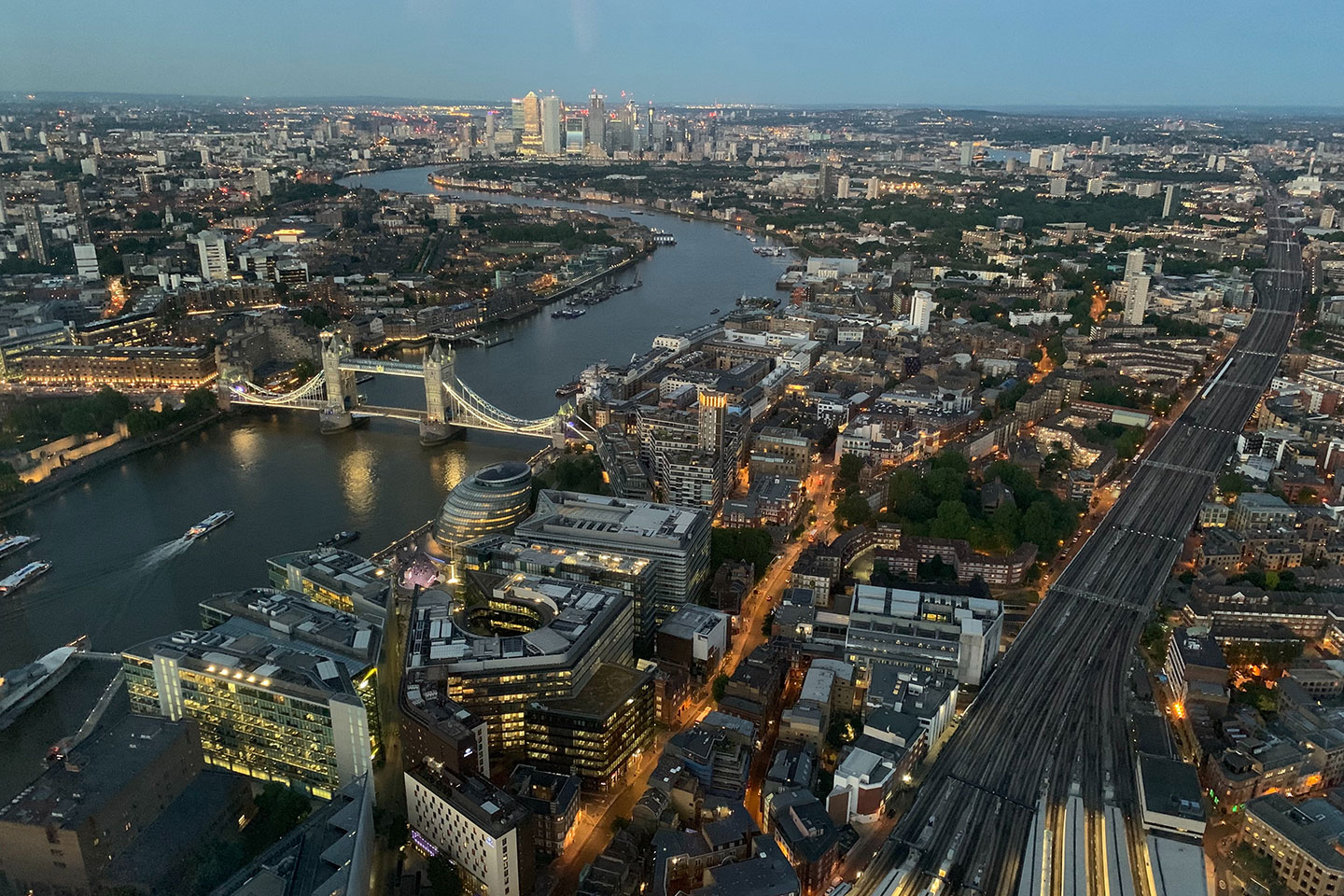 The significance of a country’s infrastructure is often overlooked, whether it be motorways and roads, railway networks, utilities or power generation. They are the backbone of every country and they directly effect the prosperity, social standards and a country’s ability to trade both domestically and internationally1.

The term “Trilemma” is used as a means to group the three most prevalent problems faced in the infrastructure industry: decarbonisation, decentralisation and digitisation. It can find its origins in the energy sector of major infrastructure2; these three issues span more than just energy production and are more than applicable to almost all forms of major infrastructure. Here, we examine the complexities of these issues and the relationship between them.

The delicate balance between centralised (governmental) and decentralised (local) control and oversight of infrastructure has long been a challenge faced by the industry, and this continues to this day, but as infrastructure networks grow in size and are being used in ever-changing ways, this problem is only exacerbated. With ever more localised and micro solutions being developed by local groups, local authorities and devolved governments all wishing to have greater autonomy of their amenities and immediate infrastructure so that it best reflects their needs3 and removes the one size fits all solutions often provided by national agencies.

However, there is still a great need for national oversight and planning so that a consistency and continuity of provision can be provided; one example of where decentralisation is impacting development is in the Indian road network; as it attempts to rapidly expand to meet the needs of its ever-growing population and economy it is encountering the problem that the National Highways service accounts for only 2.0% of the total road network but the road system is handling some 57.0% of the country’s freight transport4. Meaning that the network is heavily burdened but vital to the national economy, but the development of the sprawling road network is overseen by a multitude of different local, general and central government agencies that often overlap and are in competition with one another or they have differing agendas for development5 further complicating long term national planning and limiting the availability of funding which could slow or even halt major improvement projects.

The agenda for decarbonisation is not unfamiliar to anyone with almost every industry seeking to adopt greener and more sustainable ways of working and this is no different in infrastructure. With governments and international organisations creating sustainability targets such as the United Nations’ and European Union’s Sustainable Development Goals, that seek to develop countries’ economies, trade and infrastructure in an all-inclusive and environmentally friendly way6.

Infrastructure has the ability to greatly influence the environmental impact of a country through the optimal utilisation of its existing assets and in the development of new assets that are more efficient and fit for purpose. A prime example of this happening now is in Network Rail’s upgrade of national signalling systems from the antiquated Victorian system to a sensor-based rail management system7, which will result in fewer trains being stopped on the line with engines idling, trains running at faster more fuel-efficient travel speeds and a vast reduction in the maintenance crews needing to be dispatched on the system8 which will all aid in reducing the environmental impact of the network.

The digitisation of infrastructure encompasses a wide range of technologies and processes that address some of the key issues with the established working process is infrastructure and the wider architecture engineering and construction industries. The digitisation of infrastructure strives to make better use of information that is produced throughout an assets life cycle so that better more informed decisions can be made about the operation, maintenance and upgrades. In addition to this, the digitisation process will enable operators and asset managers to employ new tools that improve their work processes.

While we see some infrastructure assets adopting digitally-enabled workflows and technologies these are almost all via new developments and major upgrades and redevelopments, however, if we are to follow this programme it would likely take decades to fully digitise infrastructure networks. One of the major issues with the digitisation process is the plethora of new and innovative technologies that all seek to improve the current methods in which we procure, build and maintain our infrastructure and give a more comprehensive view than we have ever had before. Though there is currently a distinct lack of a cohesive plan for the implementation and integration of these technologies and processes which could leave them falling short of the anticipated benefits so, as we move forward there must be a holistic approach to technology adoption. We can already see the development of overarching principles for this with the UK’s Gemini Principles for the creation of a national digital twin.

The relationships inside the Trilemma

These issues cannot be viewed in isolation but rather in relation to one another, then areas can be identified where they could be leveraged against one another to become a means of provoking change in the other. In Figure 1 below, some of the potential catalysts for change in one aspect of the trilemma are shown against the issue they could positively influence. 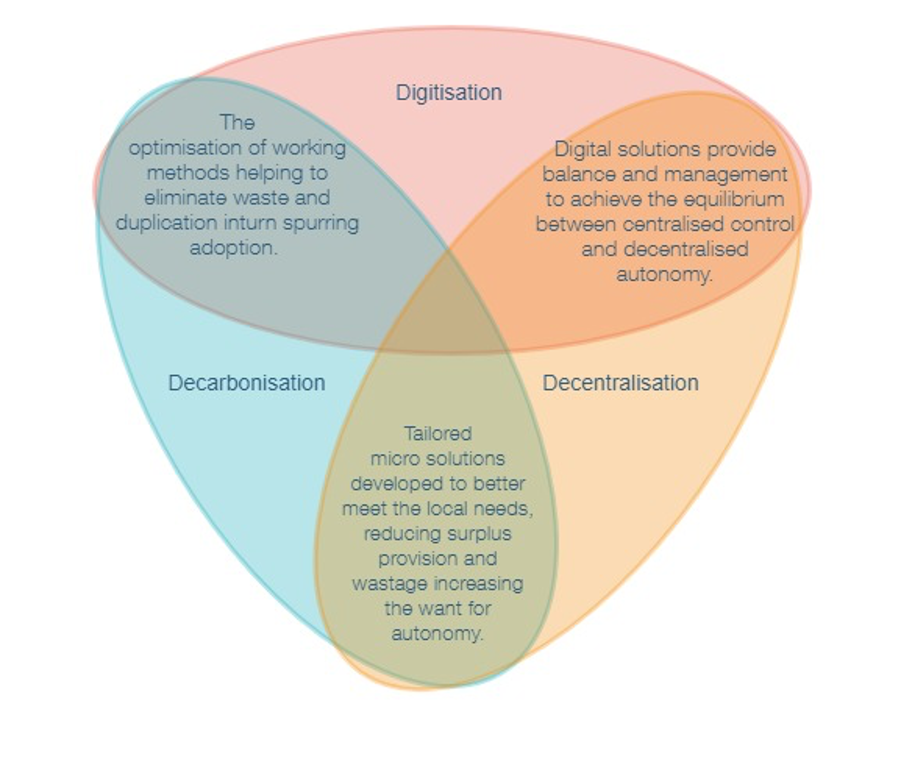 The intertwined nature of these issues proves to be a colossal task for the industry to overcome however with these challenges come great drivers to create new opportunities to re-examine the ways in which we work and develop new and innovative solutions. This is especially true in the area of digitisation which should not be seen as an issue to be overcome but instead, it should be seen as the enabler to tackle decarbonisation in the industry and manage the delicate equilibrium of decentralisation. In order for this to be achieved, it is imperative that we develop a framework that would guide the industry in transitioning its current portfolio of assets from the current methods of working into the digitally-enabled future. We must look to a holistic way in which to implement these new technologies and processes so that the maximum benefits of these can be felt and we can achieve evermore sustainable and efficient ways of working.

BIM Academy is researching a means of creating a guided framework that would aid the infrastructure assets management sectors transition into digitally-enabled workflows and technology adoption. If you’d like to be involved or like to know more, please contact [email protected].