Understanding the UK Government’s approach to infrastructure over the past 50 years. 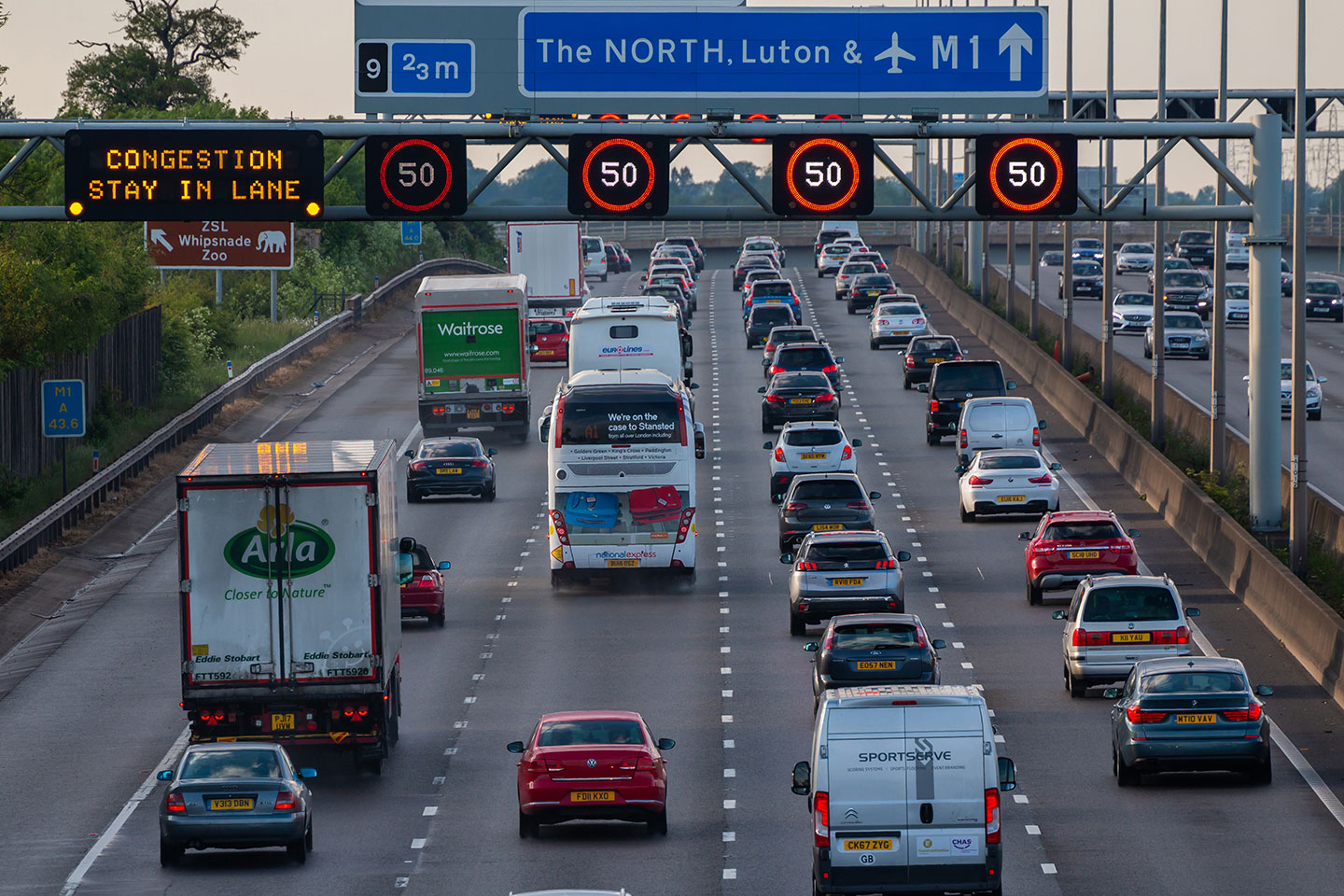 In the second half of the 20th and the beginning of the 21st century, the UK has seen some major changes in the way in which the government provides, maintains and operates infrastructure. With shifts from a nationalised system to privatisation, then the use of PFI to incentivise the private investment under the government’s watch and then, in the wake of the financial crisis, the government’s change in outlook and policy that transformed the UK from being one of the consistently lowest spenders on infrastructure for thirty years to outspending other EU G7 members, including Germany and Italy1. This article takes a brief look at the past strategies that have been implemented by the UK government and then examines the recent strategy changes that have been made – all with the aim of providing better infrastructure for the country.

The creation of our modern infrastructure system can trace its roots firmly back to the 1980s, when the UK government was faced with no longer being able to sustain high levels of public sector financing so turned to the privatisation of government-owned infrastructure, as it was thought it would bring the benefits of reducing the government’s budget deficit, raise capital for the exchequer and most importantly, through the adoption of private sector business acumen, improve efficiency2. It was said at the time that “privatisation was fundamental to improving Britain’s economic performance”3 with the 80s seeing numerous previously state-owned companies privatised, such as: British Telecommunications, British Gas, British Shipbuilders & Naval Dockyards and numerous Regional Water Boards. While the short-term objectives of privatisation were realised, the long-term efficiencies that were expected are still being debated.

The trend of privatisation of the nationally owned companies continued throughout the 1990s even with the political shift that happened in this time; there was another major change in government strategy with the introduction of the use of the Private Finance Initiative (PFI) to incentivise private sector involvement in the delivery of infrastructure and to foster an entrepreneurial culture within the public sector all done under the watch of the government4. PFI allowed the government to raise much-needed funds for large projects without having to foot the upfront capital by raising taxes, instead setting out long-term repayment plans with high-interest rates with future taxpayers to foot the bill. In the 2018 budget, it was announced that PFI would no longer be used by the central government as a financing method citing lack of value for money in the projects5.

In the wake of the 2008 financial crisis, the UK government dramatically overhauled its approach to infrastructure provision and development, committing to spending the highest sustained level of investment in 40 years, with the UK set to spend some £600bn on infrastructure in the next decade6. In this new outlook on infrastructure, it was understood that just spending more wasn’t going to meet the need for the expansion, upgrade and maintenance of our infrastructure networks, instead realising that there is a desperate need to better understand our assets – both existing and new – and how they integrate into the wider network. By having this understanding we can then be better at procuring and running these assets, making them more effective and efficient to run throughout their lifecycle. One of the most significant changes to come from this new outlook is the realisation that the digitisation of infrastructure and the wider construction industry could unlock this understanding and help bring about the efficiencies and cost savings that the government strives to achieve.

As part of the government’s endeavour to better understand infrastructure, the Infrastructure & Projects Authority (IPA) was created to be a centre of expertise for the creation and development of major projects and infrastructure. The Authority strives to create the best performing projects system of any country in the world through its projects delivery system that splits projects into three key areas: Projects, People and Process7 (this break down can be seen in figure 1). One of the fundamental mechanisms of this system is the measuring of performance as the Authority aims to utilise this to continuously improve and develop the system from the lessons learned in each project that it is applied to
further ensuring continual performance improvements over time. 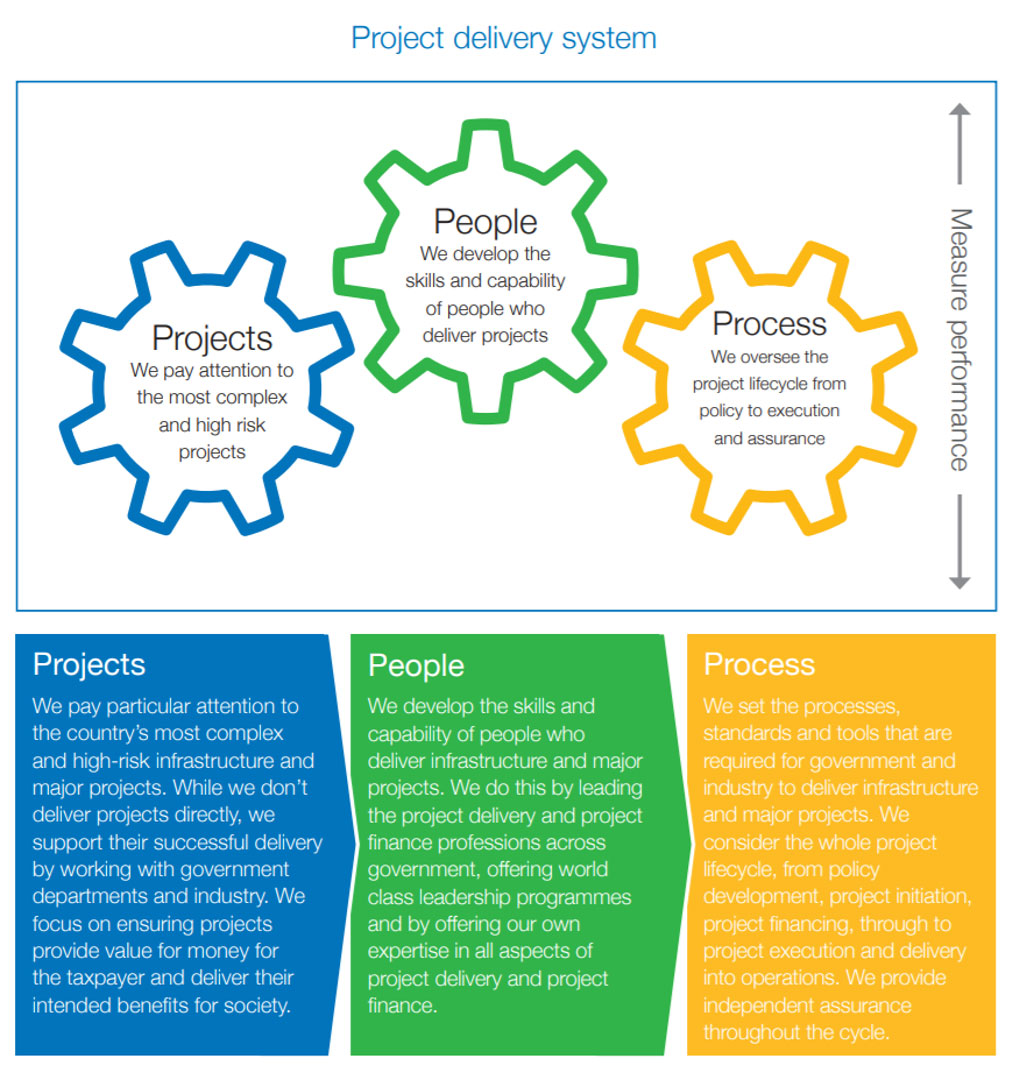 To ensure that the authority can influence improvement in all aspects of a project it is composed of five key teams that oversee specific aspects and specialisms of a project (these can be seen in figure 2). From the involvement of these specialist teams in projects they can then make recommendations on necessary policy changes and share best practice between government departments7.

One of the key publications from the IPA is the Transforming Infrastructure Performance (TIP) report, which sets out the government plans to increase the effectiveness of its investments, improve productivity in the sector, and tackle systemic issues in the industry. To do this, it provides a 10-year horizon, focusing on four vital areas that must be addressed to enable the future high performance of UK infrastructure8 (these areas and their aims can be seen in figure 3). 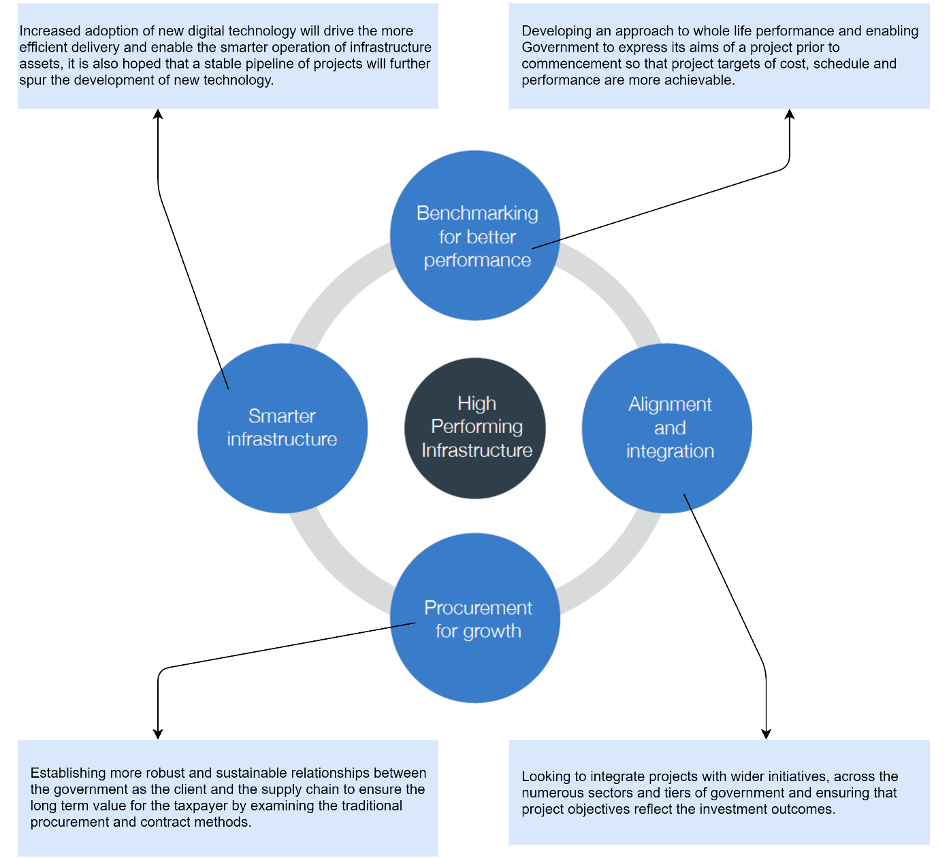 In concurrence with the publication of the TIP, the IPA also issues the National Infrastructure and Construction Pipeline annually. This outlines some 700+ infrastructure projects, both public and private, at various stages of development in the UK9. It shows the progress of priority projects that have been highlighted by the government and is seen as a tool to better plan expansion and prioritise investments being made.

Another body created to increase productivity of Britain’s infrastructure was the National Infrastructure Commission (NIC) – an executive agency independent of the government, unlike the IPA which is directly overseen by the Treasury and Cabinet Office. The NIC is tasked with providing independent analysis and advice to the government on the long term challenges faced by the industry and its recommendations for the further development of the infrastructure networks10. The NIC annually produces the National Infrastructure Assessment where it assesses UK infrastructure and provides a plan of action for the next 20-30 years of development, with the Government committing to respond to the recommendations made in each report11.

The political history of infrastructure in the UK has led to a complex mixture of public bodies, private organisations and public companies – run at arm’s length from the government – all playing a role in the provision of infrastructure in the country today. However, as we have seen, there have been strides made to try and cohesively develop Britain’s infrastructure for the future. Further commitments were made during the 2019 general election, with the Conservative party manifesto setting out their vision for the future in regard to both social and economic infrastructure, pledging to invest heavily in the development of transport networks, expand sustainable energy production, and to build thousands of new affordable homes – all of this while maintaining investment at 3% of GDP. In addition to this, one of their major pledges was to reskill workers to meet the future requirements of the industry12.

If these pledges are to come to fruition, we could see further pushes by the government to better understand our current infrastructure and what the digitised future could mean for the industry. This is why BIM Academy is currently developing a comprehensive framework that will help guide the infrastructure industry to adopt new digital technologies and workflows.

If you have any questions about this or would like to be involved, please contact: [email protected]