Understanding how Network Rail has embraced technology to survey the condition of the rail network. 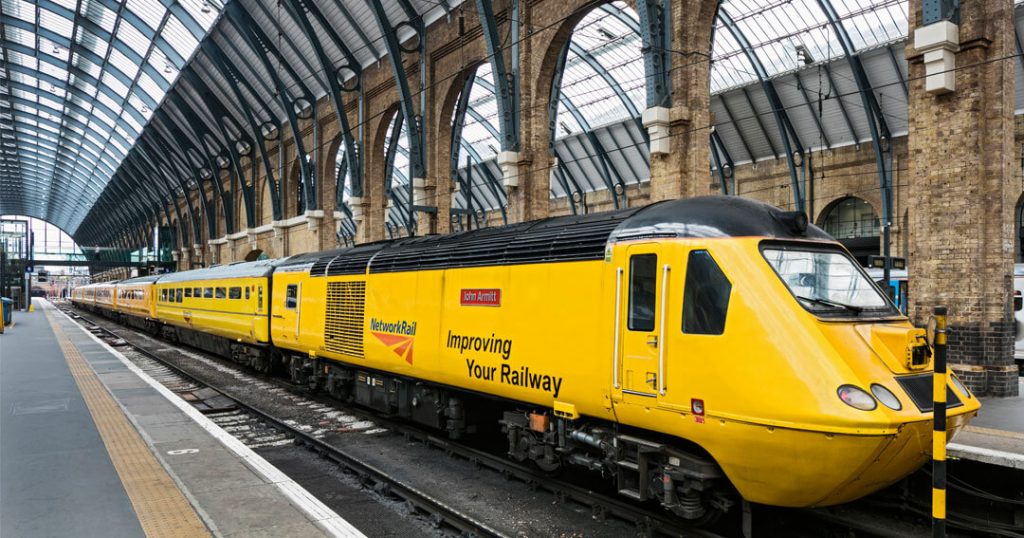 Today technology and innovation seem to be everywhere we look, whether it be self-driving cars, AI making calls for us or tasks as simple as switching the kettle on via your Google Home. The rate of both innovation and adoption seems to be exponential. With all of us slowly trying to enhance our day to day lives by using the latest technology, is our infrastructure trying to do the same thing? Here we take a look at Network Rail’s New Measurement Trains; a prime example of digital technology being embraced in the asset management of rail infrastructure. However, as Network Rail strive to integrate ever more technology into their daily working, they have to fully understand the needs, requirements, outputs and even the extent to which the new technology or work process could add value, insight and understanding to the process that it strives to enhance.

Network Rail has operated specialist rail scanning trains on its network for almost 15 years and currently operates a fleet of five dedicated track geometry trains that travel the length and breadth of the British rail network as part of its track monitoring fleet1. Each of the trains consists of state of the art technology that in various configurations can assess almost any type of asset on the network whether it be; rail deviation and condition, overhead catenary condition and tension, the structural integrity of tunnels and bridges, or assess potential obstruction due to trackside foliage.

The New Measurement Train or as it is affectionately known the ‘Flying Banana’ thanks to its bright yellow livery is a unique track monitoring train; considered to be one of the most technically advanced in the world and is considered the jewel in Network Rail’s crown. It is capable of recording and monitoring track conditions at speeds of up to 125mph, with it travelling an estimated 115,000 miles per year2 -that’s almost the whole UK rail network 6 times over per year3. But this is not what makes the New Measurement Train so unique; that is, in fact, the vast amounts of data that it collects about the network. With it collecting 10TB of image data alone for every 440 miles travelled4.

This enormous amount of data is collected by numerous pieces of sensory equipment onboard the train including; high-resolution camera placed at the front and back of the train, an overhead line inspection systems, a radio survey system that continually checks the coverage of the UK rail network’s  GSM-R communication system. Further to this, transducers and accelerometers mechanically measure the up and down movement of the train as it travels, lasers track scanners that provide information about the railhead profile by measuring the shape and movement optically2, and finally the Plain Line Pattern Recognition system (PLPR) which utilises the laser data already being collected along with images captured from a series of cameras mounted to the underside of the train, capturing an incredible 70,000 images a second. The implementation of these technologies has saved Network Rail cost both in terms of track downtime and money spent on onsite engineers, by replacing what was previously thousands of miles of manual inspections. Which in turn has aided in keeping Britain’s railway amongst the safest in the world by limiting ‘boots on ballast’.

However, despite the successful application of these multiple technologies in the New Measurement Train, Network Rail have acknowledged that there is still further room for improvement. One major opportunity that they have identified is in how they process and analyse this great wealth of data they are accumulating through the new technologies. Currently, the team onboard the New Measurement Train is capable of only analysing the most severe of faults on the line while travelling, with the remainder being flagged for inspection in Network Rail’s data centre in Derby. It is the data processing and analytics of the information created by the trains that are the real sticking points, as they still rely heavily on manual data processes to analyse, archive, and check the integrity of the data 5. Nevertheless, Network Rail have realised the need to improve their ability to interrogate their data and to yield even better results for the information they already have. To achieve this, they have put out an open call to innovators to demonstrate how they could embrace enhanced data analytics and implement such processes as artificial intelligence, machine learning, and big data.

Network Rail are beginning to understand the wealth of data that they are sitting on. It’s through this realisation that there is further value to be gained in the integrating of asset data such as that harvested in the New Measurement Train and combining it with the likes of asset registries, work reports and usage data. And begin to embark on the creation of a digital twin that can optimise the constant process of asset usage, and maintenance.

The New Measurement Train is a great example of large-scale linear infrastructure asset management’s embrace of new and innovative ways of working. To bring about efficiency and increase productivity. However, it also serves as a poignant example of how complex the integration of new technology can be. Showing the need to fully understand the necessary processes and standards that are required throughout an asset’s lifecycle, both as an input into a new technology but also how to utilise its outputs. This need to understand the whole lifecycle of technology application plays a large role in the research currently being undertaken at BIM Academy. This looks to develop a framework that can enable asset managers of linear infrastructure to integrate technologies and process that enable the creation of a digital twin of their assets.