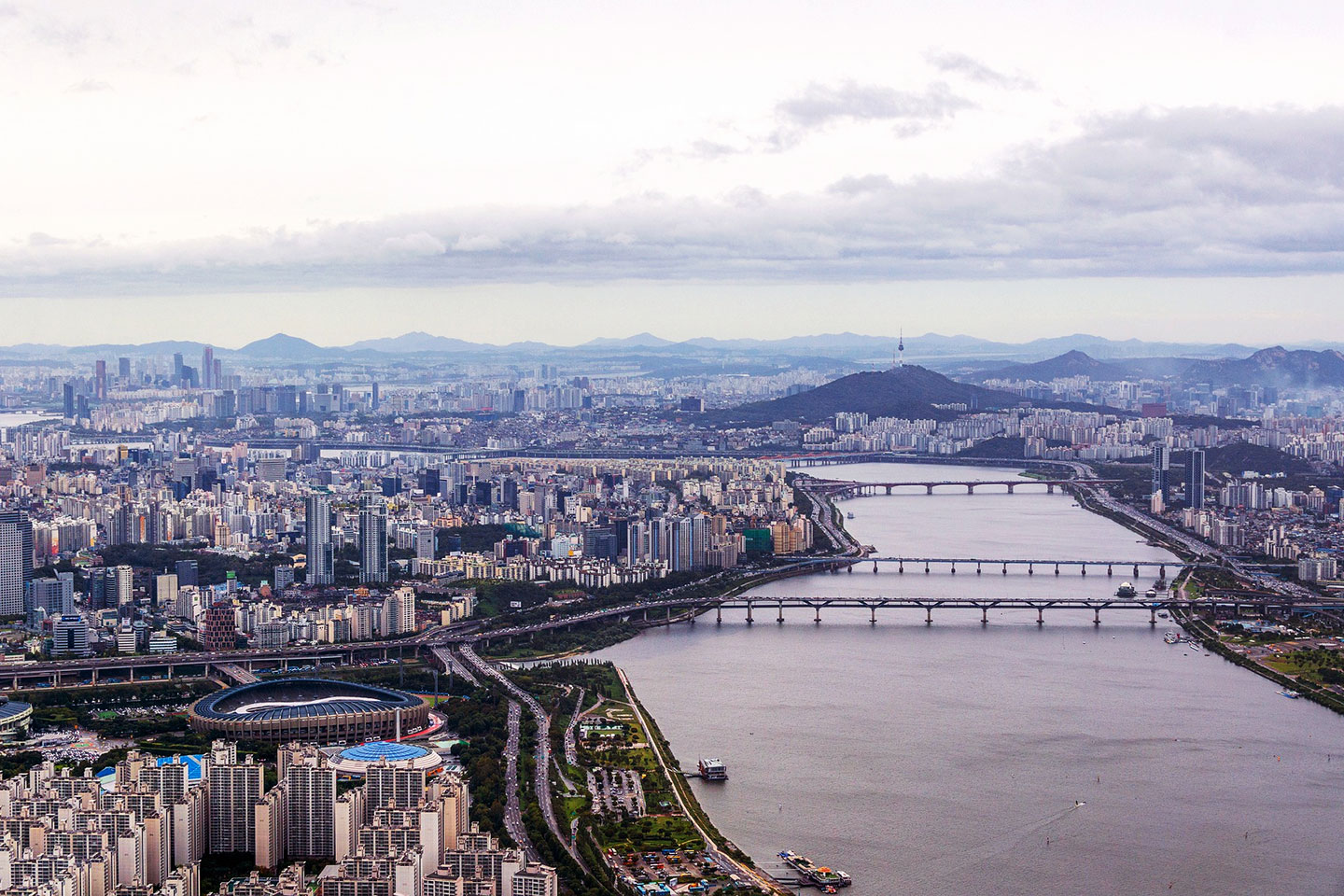 There are many reasons for the country’s growth, but ppalli-ppalli (빨리빨리) culture played a significant role, as well as diligence. Ppalli-ppalli is a common Korean expression used in everyday life, meaning ‘faster’ or ‘hurry’. It is evident in super-fast food deliveries and for having the world’s fastest Internet speed3. To put this into context, a YouTube video which showed a Swedish person shocked that she could get eyeglasses in under 10 minutes at a Korean optician has been watched by more than 1 million people4.

Likewise, South Korea tends to accept new technologies relatively quickly. BIM, which was explored among a few early adopters in the early 2000s, is increasing in popularity, with the first public project using BIM being delivered in 2008.

BIM became widespread after an international design competition for the Dongdaemun Design Plaza (DDP) in 2009. This Seoul landmark was designed by Zaha Hadid Architects5 and the free-form concept design had to be developed to detailed construction drawings, but it was not able to be achieved through only traditional 2D drawings. Therefore, BIM tools based on 3D models were needed. At this point the realisation of the benefits of 3D model became very apparent.

Fascinated by this new and innovative technology, the government rushed to roll out BIM policies. The Ministry of Land, Infrastructure and Transport (MOLIT), the premier construction administration in South Korea, published the first BIM application guide for the construction projects in 2010. Subsequently, the Public Procurement Service (PPS) has made it mandatory to apply BIM to the Turnkey projects for public facilities with more than 50 billion won from 2011. It was applied to all construction projects for the PPS’ customised services from 2016.

In addition, government-owned enterprises such as Korea Expressway Corporation (EX), Korea Infrastructure Safety Corporation (KISTEC) and the Korea Water Resources Corporation (K-Water) jumped into the adoption of BIM since the early 2010s.

The initial enthusiasm for BIM slowed down in line with the recession of the construction industry. Around that time, scepticism of BIM, which had been revered as a silver bullet, also grew even more. There were some reasons: high initial investment costs, misconception of BIM as just a 3D modelling tool only, drawing techniques of BIM authoring software that is not suitable for the South Korean construction industry setting, and a misleading approach to applying BIM while sticking with the traditional processes.

But, encouragingly, over the mid-2010s, BIM became attractive again for apartment projects. Apartments are a common residential type and account for more than 60% of the typical South Korean housing. They are mostly big-budget and large-sized projects, and the same plan is largely repeated so it can expect to earn significant benefits from the application of BIM. 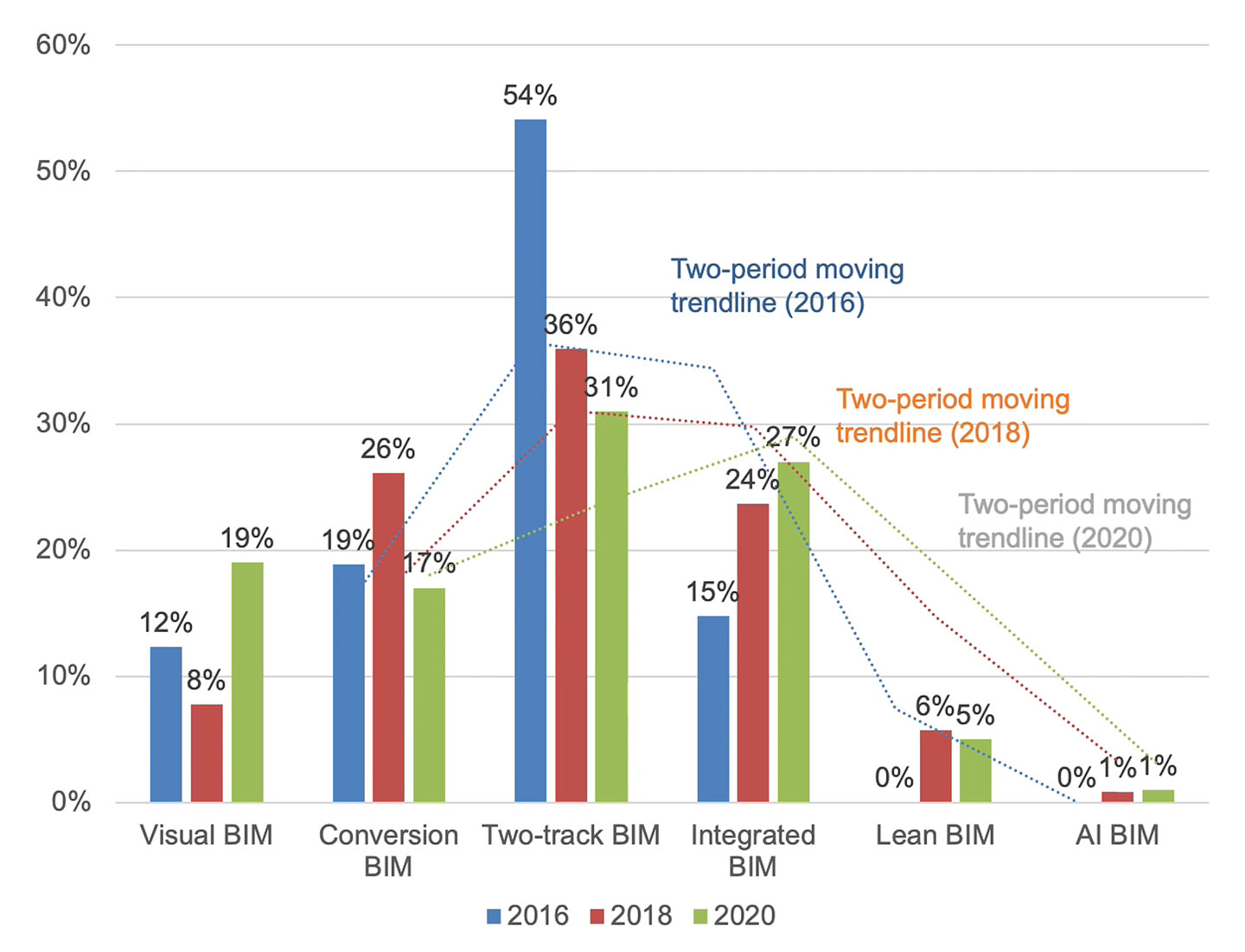 The survey also illustrates that it is required to integrate the workflow for BIM models and 2D drawings, to improve approval/permission systems for the BIM projects and to train more BIM professionals in order to promote BIM application. Another problem is the lack of BIM-enabled partners/subcontractors (See Fig. 3). Particularly, small and medium-sized companies and large firms have a wide gap in BIM adoption.

To this end, the MOLIT has recently announced the BIM Roadmap 2030. This includes improving the approval/permission administration system with an automatic review of laws and regulations, developing automation technologies for design, construction and maintenance, and establishing national BIM standards and a national digital twin platform.

South Korea has been trying to accommodate BIM in projects and industries at a rapid pace over the past decade. However, the hurried adoption also led to misunderstandings and disappointments about BIM. The most unhappy thing I felt while working as a BIM expert in South Korea for about eight years is that BIM is still not being fully used from an information management perspective. The various geometric and non-geometric information of a construction project in the entire lifecycle can be managed by utilising innovative digital solutions including BIM or beyond. South Korean practitioners, especially decision-makers and project managers, should be encouraged by this fact. The Integrated Airport Facility Management System based on openBIM9, which was announced by Korea Airport Corporation (KAC) through the buildingSMART Virtual Summit 2020, is a good example and is leading the way to a more positive and accepting future of the benefits of BIM for the built environment in South Korea. Things are progressing quickly once again and, as a country known for its speed of delivery, it is not difficult to predict that BIM adoption will increase at an exponential rate in the next few years.

For more information about any of the topics featured in this article, please contact Sangcheol Jeong.